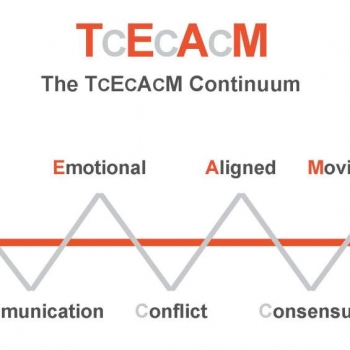 A Model for Thinking about Your Team’s Movement

Teamwork
We’ve been teaching through this model for the past decade, but I’d like to introduce you to an update to it, debuting this fall (coming to a client near you). This diagram represents the new and improved Adams Strategy Team Continuum model, one of several thinking patterns that my team and I have developed over the years.

First, a bit of background.  In 1993 I was introduced to a book that I continue to use even today.  The Team Handbook, First Edition by Peter Scholtes initiated a basic understanding of team development for me as a very young Process Improvement Project facilitator in the Navy Quality Leadership program at the Naval Station Newport, Rhode Island. One of the biggest takeaways for me was Scholtes’ “Four Stages of Team Growth.1)” Many of us remember Scholtes’ description of Forming, Storming, Norming and Performing. Who can’t relate to the feeling of starting anew with a fresh set of people, shimmying to understand their places in the vast scheme of the team’s mission?

Later, somewhere around 2005, my mentor, Rodger Lewis, introduced me to his version of the stages of team growth: tentative, emotional, attainable and masterful. He had been working with the Rotax division of Bombardier Recreational Products, and I found the last two words – attainable and masterful – clunky and abrupt.   Rodger had also added three C’s that I immediately labeled “catalysts” to move from one stage to the next.   From Tentative to Emotional, the team needed communication.   From Emotional to Attainable, the team needed consensus.  From Attainable to Masterful, the team had to develop consistency. The BRP team in Austria had used the T.E.A.M. model in some training and had drawn an arrow from left to right under the words.  Besides the clunky language, possibly attributable to “wooden” German to English translation, the linear nature of the design and the flow of the three Cs also didn’t sit right with me.  Perhaps an homage to Scholtes, Lewis’ pattern seemed to be a good parallel.

Shortly after that, I doodled my first adaptation to the model on a flip chart during a training session I was doing.  The simple adjustment changed the design profoundly and forever: I added an arrowhead pointing left to the left of the line.  The arrows on both ends of the line depicted movement both forward and backward.  My point was that while these words could describe the stages of team growth, the reality is that teams are on a continuum, always moving forward or backward, never static.  In fact, we all know that the best teams can slide the whole way back to “tentative” in a matter of minutes depending on the effect of the changes around them.  From that point forward, we called this model the Team Continuum instead of the stages of team growth.

After years of wrestling with the C-words as catalysts and the clunkiness of the team acronym, I have finally decided to unveil our new and improved Team Continuum (feel free to kick the tires).

I’ve left Tentative and Emotional and Communication unchanged. These three always seemed to make the most sense to me and required little explanation.  When we teach through communication as a catalyst, we emphasize the need to navigate to facts, getting to a full grasp of the situation.  On the road to understanding the facts, teams encounter strong opinions shaped by previous experiences; these differing views and even the facts can prick values causing emotions to surface. As emotions surface and begin to bump into one another, conflict is inevitable.  The duration and lasting effect of that conflict are something a leader can control.

The older I get, the more I realize that there is little forward progress without conflict of some kind. I studied Clausewitz’s On War a dog’s age ago and learned that friction was good for two things: 1) spotting where, in the fabric of disagreement, I need to more deeply analyze and 2) advancing the contention to move to an agreement of some sort.   Applying Clausewitz to our team continuum model, I realized that just acknowledging emotions wasn’t enough.  The real catalyst to getting an alignment is active conflict.   I often illustrate this idea using the metaphor of a car stuck in snow or ice – without the addition of friction, the wheels just spin.  Living in the North, I am way too familiar with this situation.  Without resistance, the wheels spin, and I often end up going a different direction than planned: my car and I are not “aligned.”

I should add a few lines here about how negatively we westerners view the act of conflicting. I’ve worked with teams who have inordinate potential that remains untapped and unlocked because they refuse to conflict. The roots of the word mean “to strike together.” It is this militant connotation that I think causes the most anxiety in our hearts.  What if, instead of two people striking one another, the model for conflict was two ideas striking against one another.   Healthy debate is good for a team.  There is wisdom from the writer of The Proverbs who posits that iron sharpens iron.  The effect of this active, deliberate, sharpening style of conflict bears good fruit.  Active conflict as a catalyst led me to the next improvement to the team continuum: changing “Attainable” to “Aligned.”

Attainable reads like a possibility instead of a true condition.  Aligned is an actual condition, one that we leaders strive for daily (crave daily?). The aligned team is still fragile.  We may agree at the moment to aim in the same direction, but aiming AND executing in the same direction – moving forward – requires Consensus.

The best way to understand the Consensus catalyst is by illustration.  The team has reached consensus when each member leaves a decision-making meeting in agreement and tells his team, “This is what WE are going to do…” instead of “This is what THEY decided to do…”  Consensus requires work: nipping, tucking, taking away, adding to and ending up with something that the entire team agrees with, wholeheartedly.

The consensus is what initiates the team into Moving Forward. Anyone who has hung out with us more than an hour or two has heard us coaching teams to “move as a team.”  The implication is that moving forward means altogether, no one left behind, no one racing ahead and all aiming the same direction.  The team that is moving forward has the potential to succeed.  I think this is what Lewis meant by “masterful.”  In his view, the team was full of mastery.  Mastery and application of it require will. When I changed Masterful to Moving Forward, my intent was to add this sense of will – the impulse that got the movement started and that, Lord-willing, will keep it moving. Until change occurs and by nature causes the team to slide back.

The leadership key – how to put the Team Continuum to use – lies in developing proficiency in the catalysts.   While sliding backward is inevitable, regaining forward movement is entirely dependent on the leader initiating and engaging the right catalyst.  As Scholtes aptly says, “Don’t panic.  With patience and effort, this assembly of independent individuals WILL grow into a team.2)” Patience, friends. 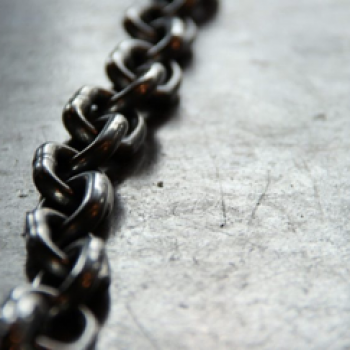 Three Excellent Reasons to Move as a Team

Teamwork’s ubiquity makes it hardly worth debating.  That we need teams to do world class things seems inarguable. When to apply teams has been vigorously discussed.  My go-to on this subject is former McKinsey director, Jon Katzenbach. Katzenbach has written extensively on the topic of teaming.  One of my favorite articles is The Discipline of Teams, where he says:

We found that there is a basic discipline that makes teams work. We also found that teams and good performance are inseparable: You cannot have one without the other.

I have been arguing for a higher order of teamwork with several executive teams, lately.  Katzenbach also famously wrote in The Myth of the Top Management Team,

But walk into almost any organization and ask anyone about the “team at the top.” The immediate response is likely to be a knowing, skeptical smile, followed by a comment along the lines of “Well, they are not really a team, but…”

But team at the top is a badly misused term that obscures both what teams can actually accomplish and what is required to make them work. The terminology is important: when we are undisciplined in our language, we become undisciplined in our thinking and actions. Real teams must follow a well-defined discipline in order to achieve their performance potential.

A perplexing kerfuffle emerges: the gaggle of folks allegedly leading are more than likely not a team (according to Katzenbach’s definition), yet -alarmingly – “teams and good performance are inseparable.”

My argument is that the key word here is “performance.”

For example, we see how quickly a public board will act to remove a CEO for poor earnings per share. What role did the team play in the poor performance? Indeed, everything rises and falls on leadership, especially in our Western way of thinking. But, what if the whole team was accountable for success?

In our operational excellence system, the top executives share a set of common targets.  Most executive level groups have difficulty conceiving of shared targets.  Stuck in their stovepipes, they nod and smile, but entirely fail to grasp that the team must move as a team.

Here is a list of three things that movement as a team does to improve team performance:

The Crucible of Shared Crisis. Many world class companies’ intense focus on problem solving causes them to keep the taste of crisis on the tip of their collective tongues. When team members share in a crisis, they drop their local agendas, stop behaving badly and pull together to do amazing things.

Knowing Each Other Leads to Deeper Trust. When a group moves as a team, friction is natural and conflict occurs. It isn’t until a team begins to conflict that truth comes out.  When truth arrives, it is like a bright light shining in the dark. Once we get used to the jarring effect of it, we can see details more clearly: the facts emerge and trust increases.  Facts de-escalate the emotions of conflict.

Navigating Conflict Together Improves Respect. When a team member takes a stand, the team gets to see the very essence of that team member.  Agree or disagree, respect for a well-argued opinion is natural.

If you live “at the top” of your organization, you work with a group of people who got there because of their ability to work independently. World class performance, however, requires the interdependence of the team. The sooner you get there, the sooner you move – as a team – to sustained performance.